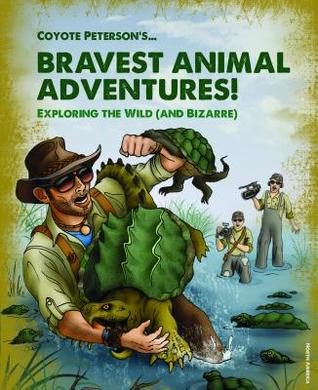 Be Brave... Stay Wild! Coyote Peterson's Brave Adventures: Wild Animals in a Wild World chronicles some of the wildest encounters Coyote Peterson has had over the course of his travel. The stories begin with his first snapping turtle catch as a kid and lead down a trail of incredible moments he and his camera crew have had while filming their Brave Wilderness Shows. From a giant alligator that nearly caught Coyote in its bone crushing jaws, to an 800lb Grizzly Bear that helped Coyote teach the audience what to do and NOT do if you ever encounter one of these enormous predators in the wild. Each and every tale is laced with fast paced action and daring adventure as Coyote, driven by a natural curiosity and love for animals, gets dangerously close to incredible wild creatures large and small. On the small but painful side, Coyote's quest to endure the most painful sting in the world has led him up the ladder of most excruciating insect stings including: - fire ants - the velvet "cow killer" ant or wasp - the tarantula hawk wasp, with the second most excruciating sting in the world - and finally, the bullet ant that has the most painful sting in the world This collection of short stories aims to inspire a healthy dose of adventure and a fascination with wildlife for children of all ages. While the danger is eminent for Coyote, each story reminds the reader that animals rule the wild places of this planet. And that, as long as we respect them from a safe distance, even the most frightening of creatures are more likely to be afraid of us than we should ever be of them.
Libros Relacionados